Poverty in BC and What You Can Do About It 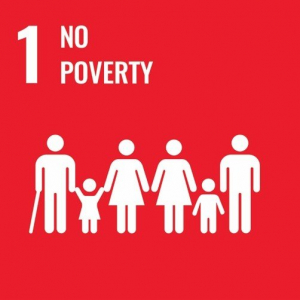 What Is The UN’s “No Poverty” Goal?

“No Poverty” is the first United Nations Sustainable Development Goal, which aims to “Eradicate poverty everywhere, in all its forms”.

To ensure the goal has been achieved, the UN will aim to (1) eliminate extreme poverty (people living on less than $1.25 a day), (2) reduce all other forms of poverty by at least 50%, (3) implement national social protection systems and measures, (4) build resilience of the poor and vulnerable, (5) mobilize resources and (6) create policies and reforms worldwide to end poverty once and for all.

So why this blog?

Although we live in one of the most developed and resource-rich countries globally, Canada and British Columbia have to deal with alarming poverty levels here at home. Thus, the purpose of this blog is to raise awareness about poverty in BC. If poverty is eliminated, we believe that it will contribute to building better communities by reducing social inequality and fostering economic growth. Poverty is a human rights issue that is prominent in BC. Women, gender diverse people, Indigenous people, single seniors and adults, people with disabilities and people of colour are more likely to live in poverty (BC Human Rights).

October 17, 2021, marked the International Day for the Eradication of Poverty, yet the world doesn’t have anything to celebrate. For the first time in 20 years, extreme global poverty increased to almost 125 million people. Based on this gloom data, it is now projected that the world will miss the 2030 target to eradicate poverty when global poverty persists at about 7 percent or 600 million people.

We live in a developed country, and we may think that we are not affected by poverty. Sadly, that is not the case, as poverty affects us almost as much as most developing countries. Although the rates have been declining by almost 4% during the last 5 years, we are still far from eliminating poverty in Canada, as shown in the following graph (Government of Canada). 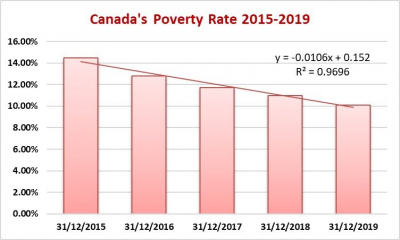 The following chart identifies poverty in Canada among various demographic groups. The most affected are women, single individuals, and persons with disabilities. Children are the fourth biggest group affected by poverty, followed closely by new immigrants and Indigenous people living off reserves (Government of Canada). 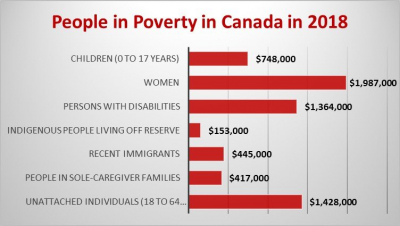 What is the Federal Government Doing About Poverty In Canada?

In August 2018, the Canadian Government released Opportunity for All – Canada’s first Poverty Reduction Strategy. It is based on three main ideas:

Deploying this program is in alignment with the UN Sustainable Development Goals and aligns with its targets to eliminate poverty in Canada (Government of Canada).

BC has always had its fair share of poverty levels, especially in the Vancouver region. Following the confederation, rapid increases in population in the early 1900s were not kept up with the economic growth in Vancouver. Vancouver saw an increase of 220,000 people from 1901-1929. In the last half of the 19th century, a new type of poverty was introduced, poverty in which was derivative not from typical seasonal job shortages but from a lack of wage-paid jobs which stemmed from business closures and layoffs due to economic turns. In 1944, the Federal Government introduced a social welfare program known as the Family Wellness program to diminish poverty levels in large Canadian cities. Similarly, today many actions to reduce poverty are being implemented by organizations and governments. However, today, poverty is still rampant in BC and the Lower Mainland (Read more here). 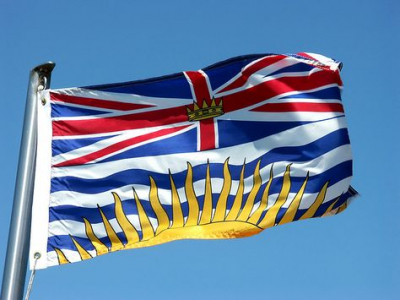 Poverty in BC Now


A report published by the Canadian Broadcasting Corporation (CBC, 2020), nearly one in five children in BC lives in extreme poverty, whereas that number is double on the First Nations reserves. Based on the same report, poverty affects more severely.

“…children of immigrants and refugees, children from female lone-parent families, children in racialized families, those affected by disabilities, and youth transitioning out of government care are at greater risk of living in poverty.”

How much does poverty cost in BC?

Contrary to popular belief, poverty does not just affect those who can’t afford necessities; it negatively affects any society.

According to Canada Without Poverty (a federally incorporated, non-partisan, not-for-profit and charitable organization dedicated to eliminating poverty in Canada), high poverty rates directly influence the [economy], healthcare, and criminal justice systems. It affects health as lack of food, shelter, and access to medical care decreases productivity, savings, and overall quality of life. Poverty can double or triple the chances of developing diabetes and other health complications.

The bottom line is that poverty in BC represents a  direct cost to the Government alone of  $2.2  to  $2.3  billion annually, or close to 6 percent of the provincial budget. The cost to society overall is considerably higher — $8.1 to $9.2 billion, or between 4.1 percent and 4.7 percent of BC’s GDP (Gross Domestic  Product,  or the size of our economy).  That is as much as $2,100 for every man, woman and child in BC, or $8,400 for a family of four, every year. In contrast, the estimated cost of a comprehensive poverty reduction plan in BC is $3 to $4 billion per year.

Poverty also leads to higher crime rates and increased incarcerations. Higher incarnations rates mean higher costs for the Government and taxpayers. Although eliminating the poverty gap won’t be cheap, continuing to ignore this problem will, on average, continue to cost British Columbia between $8.1 to $9.2 billion every year[See additional info].

What Is the BC Government Doing About Poverty?

In response to poverty, the BC Government has launched a new strategy titled “Together BC,” which addresses house affordability issues, minimum wage, youth programs, accessible education and training, and investing in social inclusion. This ambitious program aims to reduce overall poverty in BC by 25% and child poverty by 50% before 2024.

Based on TogetherBC’s 2020 annual report, poverty levels have decreased substantially from previous years, as shown in the following chart. Further, the BC government has introduced the Poverty Reduction Strategy Act founded on four guiding principles: affordability, opportunity, reconciliation and social inclusion. 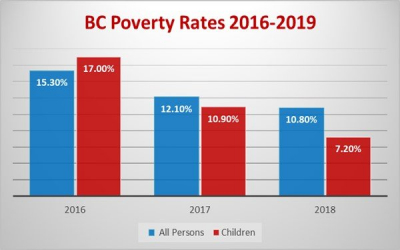 The Impacts of COVID-19 on Poverty Reduction

What can YOU do to eliminate poverty?